What It’s Like To Live In A World Where My Illness Is Invisible: “I can’t stop vomiting"

Cyclic Vomiting Syndrome…Defined as, a rare disease characterized by recurrent severe episodes of nausea and vomiting with no known cause or cure.  An episode may last hours to several days and then followed by a period of time free of nausea and vomiting. CVS can affect children and adults, there are also many triggers that can set an episode off.

Just a note: If your sensitive in regards to talk of vomiting of any sort, I would advise against reading this blog post

I started being sick around 2016 with these mysterious episodes of severe nausea and vomiting that would last for days or a few weeks at a time, then I would have a week or two episode free. I couldn’t eat, drink or keep any of my medication down, I was constantly being admitted to hospital for IV fluids and low potassium due to being dehydrated. I would go out for meals with the family and would have to run to the bathroom to be sick, and would then feel so guilty and weak.

Fast forward a year to September 2017, I was violently sick everyday; there wasn’t a time I was episode free and was always in excruciating pain (like a dull achy pain in my stomach). I had no appetite, my mum took me to A&E, where I was told it could be suspected appendicitis, however, after a CT scan, it was ruled out.

Doctors were baffled as to what was wrong with me. I got transferred to the gastro ward where I was seen by the mental health team, gastro doctors, and a neurologist. I had numerous scans including a gastro empty, endoscopy, barium swallow, someone watching me eat to see if I was actually sick, urine and stool samples to check for crohns and colitis and countless other scans and tests. They all came back negative which was frustrating, I was no closer to getting any answers as to what was wrong with me. 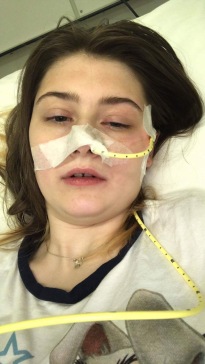 After two months in hospital and going nearly eight weeks with no nutrition except for IV fluids and anti-sickness medicines, they trialed a feeding tube to get some nourishment into me while they worked out what was going. An NG was the first option which didn’t work, I vomited everything up that entered my stomach. The next option was NJ which I tolerated and remained on for about a month.

December 2017 the day my life changed forever, the day I was finally listened to and recieved a diagnosis. I remember this day like it was yesterday, a specialist in nutrition and gastro doctor came and sat on my bed and mentioned this rare condition called CVS. All my symptoms added up to CVS.

However, I do not have classic CVS, I have abnormal CVS. My type doesn’t come in episodes that last days to weeks and then go a period of time episode free as in the normal CVS diagnosis. I’m constantly sick everyday up to 5-6 times a day. I can’t tolerate anything orally including food, fluids and medications. There is no cause and no cure, it only can be managed by taking anti-sickness medications, but unfortunately that doesn’t stop me from being sick, it only reduces the amount of times I’m sick.

So, on December 13, 2017 myself and my doctor agreed it would be best if I got a feeding tube fitted called a J-PEG (Percutaneous Endoscopic Gastro-Jejunostom), which bypasses the stomach into the small bowel, as my stomach doesn’t tolerate anything in there.

I was discharged from hospital in January 2018 with my new feeding tube, a diagnosis and a feeling of relief that finally someone listened to me and didn’t think it was me making it up or me making myself sick.

Having abnormal CVS can be really tricky, its life altering and very tiring at times. But its made me the person I am today, with my different health conditions and feeding tubes, I still do the things I love. It may take me a little more time than other people to do things, but it doesn’t stop me.

Now, I love raising awareness of having a rare invisible illness: just because someone looks fine on the outside, doesn’t mean they are.

I hope my story helps other fellow CVS suffers.